An object that is small, round and blistered is seldom an attractive thing, which is why, I suppose, I’ve yet to be asked to pose semi-clad for the cover of Vogue.

But the pizza I ate at the recently-opened Alicia’s Micro Bakehouse met this description fully and should feature on the cover of glossy magazines around the world, for it was a beauty.

As is fitting for a place that began life as a baker of bread and developed into a pizza joint, the star of the show was the dough.

The website blurb tells me it’s a sourdough base, made with unbleached organic flour, water and sea salt.

It’s allowed 24-48 hours to develop and has none of the additives used by many manufacturers.

And it shows, for there’s a wonderfully full flavour and pleasing texture.

The wood-fired oven gives a hint of smoke and its fierce heat creates pleasing black blisters that shatter gently in the mouth like cinder confetti.

The version I chose from the short menu was La Pecora Sarda, at £10.50 one of the more expensive pizzas. 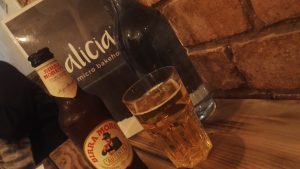 Both vanished in short time as we fell reverentially silent over our food.

Service throughout was attentive and friendly and there’s a sense that Alicia’s Micro Bakehouse is as much a labour of love as a business.

The space itself is – as the name suggests – tiny.

Decor is urban, with bare walls, stone floors and re-purposed chairs and tables.

Alicia’s Micro Bakehouse has raised the bar for pizzas in Birmingham.

I who was no huge fan of pizza have suddenly become so.

We paid less than £28 for two pizzas, a glass of wine and beer.

You can order takeaways or deliveries.

Book a table if you want to eat there – there are’t many covers.

It’s closed at lunchtimes and on Sundays and Mondays.